The Volvo XC90 does it again!

What if a Swedish born and bred crossover utility vehicle (CUV) came to the Truck of Texas rodeo and rode away with not one, but several top awards? Well it happened this last week at the Knibbe Ranch in Spring Branch, Texas where the new generation 2016 Volvo XC90 All-Wheel Drive crossover took on the best of the rest going away at the end with the top prize - the Texas Auto Writers Association (TAWA) 2015 CUV of Texas award. 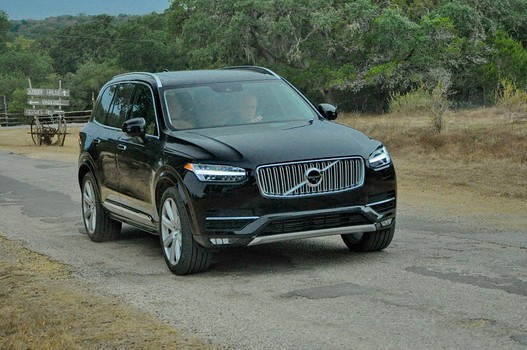 That was after they had been named as the Luxury Crossover Utility Vehicle of Texas while their new Volvo Sensus touchscreen information system - that works like a tablet - was recognized with the Best Connectivity Award. And while they were at it, their (also all-new) Volvo T6 Drive-E 2.0L super and turbocharged 4-cylinder engine with its 8-speed automatic transmission finished second only to the all-new Cummins 5.0L Turbo Diesel diesel and Aisin transmission for the 2015 Best Powertrain Award.

'One Riot, One Ranger' is a legendary part of the history of the Texas Rangers and the folks at Volvo appear to understand that principle clearly coming to the annual Truck of Texas competition with just one vehicle and one person to challenge the 16 entries from 13 manufacturers for recognition as the best crossover utility vehicle in Texas for 2015.

Full Disclosure: This was not a first rodeo for Volvo. They have been here before. In fact, entering their 2003 Volvo XC90 in the 2002 Texas Truck Rodeo competition, Volvo actually rode away with the 2002 Truck of Texas Award (there were no CUV or SUV categories then). Then, as now, the Volvo success formula would seem to be "One Rodeo, One Volvo"

Volvo, pulling on their Texas boots this year, entered their brand new 2016 XC90 T6 Crossover in the TAWA Truck of Texas competition - this time in the Crossover category. Recently arriving in the U.S., the all-new XC90 is the latest generation version of their popular crossover and the first fully 'clean sheet' design fully developed by Volvo since they separated from Ford in 2010. And, based on our short drive, this is a beauty.

The 2016 Volvo XC90 AWD crossover is stunning in design on the outside and the ultimate in distinctively functional design and use of materials on the inside. The new XC90 comes in three trim levels - the volume level Momentum (MSRP $48,900), luxury level Inscription (MSRP $54,500) and the dynamic sporty looking R-Design (MSRP $52,900).

Features we noted in particular were the new Sensus information system with Navigation and its 9-inch tablet-like touchscreen plus voice-command capability with controls also on the steering wheel; the Integrated Child Booster Seat in the center of the second row which can independently slide forward for parent access from the front row when necessary and the Drive Modes Control System (with the its finely crafted control knob) located close to the driver in the center console.

Drive Modes Control has five modes available from ECO to an Individual Mode that allows the driver to customize responses from powertrain, steering, braking and suspension. We particularly like Dynamic (others call it Sport) which adjusts throttle and transmission shift points for quicker response PLUS it lowers the car by 0.8-inches at speeds above 84 mph to improve aerodynamics.

But the Off Road Mode was the most fun on the ranch roads. It operates only at speeds under 25 mph. When engaged, it raises the XC90 1.6-inches for greater ground clearance, locks the differential, activates Hill Descent Control, sets steering to Comfort Mode, optimizes the powertrain for traction and sets Electronic Stability Control for traction/sport.

Lastly, the new 2016 Volvo XC90 AWD is chock full of well-known Volvo safety features including Pedestrian and Cyclist Detection, Park Assist Pilot for automatic stall parking (in addition to parallel parking) and Rear Collision Warning that uses the Rear Facing Camera to detect cars approaching from behind at an unsafe speed and pre-tightens seatbelts and applies the brakes to prevent being pushed into a car in front.

And, the new XC90 has already been rated by the Insurance Institute for Highway Safety (IIHS) as a Top Safety Pick+ - their highest rating.

One Rodeo, One Volvo seems to be a winning combination for Volvo in Texas. We highly recommend you drive it to see why for yourself.